How many gardeners hear this and how often.. every year! Most of the time we can all shrug it off and calmly explain to the unfortunate indoor cats the reality of the situation. Sometimes though, when we've been out in the third consecutive week of numbing grey drizzle it all gets a bit much. The homes of gardeners in the winter generally wake up to a soundtrack of weird gristly noises, snaps, clicks and groans as we strategically place ourselves out of bed. Having said that, we rarely have major coughs or colds! (There's always an up-side). 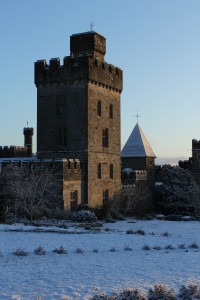 This Winter has been as busy as ever for us here in Lismore and has contained one of the biggest and most exciting landscaping projects the garden team has tackled so far, the project managing to utilise all the garden team's skills as individuals and as a collective. The complete re-landscaping of the Castle Courtyard began in the Spring of last year with our head gardener (Darren Topps) working closely with Lord and Lady Burlington over the summer to create the landscape plan, the emphasis being on delivering a courtyard garden that allows practical elements, like the circular driveway, parking spaces and a formal central lawn for entertainment to be maintained, but with much more 'gardened' space to create the feel of a castle courtyard that is on the edge of wildness.

Groundworks began at the end of October, keeping outside contractors to a minimum, just one skilled JCB driver aided by Matthew Tull our dumper driving gardener. By December 1st we were planting the first round of plants, the trees and shrubs that will create the back-bone of the space and help screen certain viewpoints to make the courtyard appear much more densely planted than it is and enable a 'slow reveal' of the formal circular lawn and front door of the castle when guests first enter through the main gate. The formal lawn was also laid and climbing roses planted, eventually growing to completely romanticise the walls and drop scent pockets around doors and windows. To be added this Spring and through next year, will be the main herbaceous element, a large proportion grown from seed by the team and grown on since last year. The courtyard is a challenging space to plan planting for, since there are several different micro-climates within it and a wall for every aspect. The main area of ornamental planting will bleed out from the South-West facing corner which gets the most light and warmth and which will be the location of an outdoor seating area. The planting will be romantic, billowing and scented with a simple colour palette. The rest of the courtyard will also have herbaceous elements, but kept much more simply to ground-covers and understorey textures and shading and subtle use of light colours to 'lighten' up the North facing corners. The final phase of the hard landscaping work will begin in mid February, where a Corten steel edge will be installed (again by the creaky spines of the garden team), to define and tidy the lawn edge and provide a friendly 'bump' to border edges to help remind drivers when they're 'off-road'. The driveway aggregate will also be laid, allowing a surface that remains natural, warm, permeable and able to be seeded and grown into by edge plants to eventually create that feeling of an almost wild garden. Unfortunately the courtyard is only accessible for paying guests of the castle, however, there are several events through the year that allow an opportunity for the public to see this part of the castle. (Keep an eye on the website and social media). 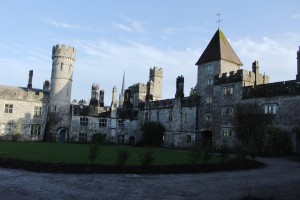 Tackling large landscaping projects is one of the most enjoyable and rewarding aspects of working as a gardener, even in the Winter when we do nothing.. (rolls eyes). Other projects that have been planned or started during the Winter, as well as the usual on-going jobs of mulching, pruning, cutting back, fixing up, tool/machinery repair, pot washing, propagating, stock-taking, spreadsheet making (of seed lists and growing info), plant research, health and safety briefs, weeding (for it is Ireland and the growth of bittercress, couch-grass and groundsel is ceaseless), include;

Paths in the lower garden have been raised and levelled to improve safety and ease of passage, it has made a great improvement to the experience of the garden for visitors.

A new area of planting has been planned for the usual annual beds, gradually we'll be introducing more and more perennial planting to add some permanent structure to the space. This area will inevitably remain changeable for the next few seasons until we settle on the best plans, but that's half the pleasure! This area is a fun place to play with plants and as a gardener, it's nice to have a part of the garden that isn't set in stone and enables you to unbox your ideas to see if they work. This season we have some really exciting plans for the space that marry ornamentals and utility crops... my lips are sealed. 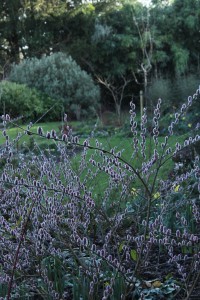 Lee Behegan, our youngest member is off to complete an internment with Pennsylvanian garden, Chanticleer, in May and hopes to secure a place in a Botanic training garden this September to continue developing his horticultural career.

Sowing is well underway now and prop space is already becoming limited, soon Mervyn the veg-guy and myself will be passive- aggressively rearranging each others seed trays to try and make room.

Many new plants have been added to the garden over the Autumn and Winter, including roses and some new Malus cultivars.

The legend that was Hurricane Ophelia dropped some of our bigger trees, especially in the upper garden where we lost a mature Acer and two big old Bramley's as well as a beautiful Magnolia stellata in the lower garden. The loss of these trees completely changed the views in the garden, the upper garden gallery area in particular has a noticeably different feel and is much more open now. As with gardening though, big changes like these can bring positives and the views of the castle are now uninterrupted as you emerge from the riding house and the lower garden tree-top textures and facing larger landscape make a very pleasurable back-drop from the gallery lawn.

Winter time is almost over for us, temperatures are (very slowly) rising, the mornings are becoming lighter and dare I say it, the rare moments where sunshine breaks through, there is a tiny tingle of heat trying to dry our bones out. It's almost time for us to climb out of our centrally heated potting shed after all the 'down time' (rolls eyes) and start doing things! 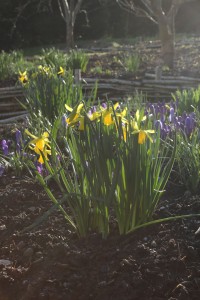 View all posts by: Vick